New X-ray spectroscopy method based on the classical double-slit experiment offers a deeper insights into the physical properties of solids.

An international research team led by physicists from Collaborative Research Centre 1238: Control and Dynamics of Quantum Materials at the University of Cologne has implemented a new variant of the basic double-slit experiment using resonant inelastic X-ray scattering at the European Synchrotron ESRF in Grenoble.

The double-slit experiment is of fundamental importance in physics. More than 200 years ago, Thomas Young diffracted light at two adjacent slits, thus generating interference patterns (images based on superposition) behind this double slit. That way, he demonstrated the wave character of light. In the 20th century, scientists have shown that electrons or molecules scattered on a double slit show the same interference pattern, which contradicts the classical expectation of particle behaviour, but can be explained in quantum-mechanical wave-particle dualism. In contrast, the researchers in Cologne investigated an iridium oxide crystal (Ba3CeIr2O9) by means of resonant inelastic X-ray scattering (RIXS).

The crystal is irradiated with strongly collimated, high-energy X-ray photons. The X-rays are scattered by the iridium atoms in the crystal, which take over the role of the slits in Young’s classical experiment. Due to the rapid technical development of RIXS and a skilful choice of crystal structure, the physicists were now able to observe the scattering on two adjacent iridium atoms, a so-called dimer.

‘The interference pattern tells us a lot about the scattering object, the dimer double slit’, says Professor Markus Grüninger, who heads the research group at the University of Cologne. In contrast to the classical double-slit experiment, the inelastically scattered X-ray photons provide information about the excited states of the dimer, in particular their symmetry, and thus about the dynamic physical properties of the solid.

These RIXS experiments require a modern synchrotron as an extremely brilliant X-ray light source and a sophisticated experimental setup. To specifically excite only the iridium atoms, scientists have to select the very small proportion of photons with the right energy from the broad spectrum of the synchrotron, and the scattered photons are selected even more strictly according to energy and direction of scattering. Only a few photons remain. With the required accuracy, these RIXS experiments are currently only possible at two synchrotrons worldwide, including the ESRF (European Synchrotron Radiation Facility) in Grenoble, where the team from Cologne conducted their experiment.

‘With our RIXS experiment, we were able to prove a fundamental theoretical prediction from 1994. This opens a new door for a whole series of further experiments that will allow us to gain a deeper understanding of the properties and functionalities of solids’, says Grüninger. 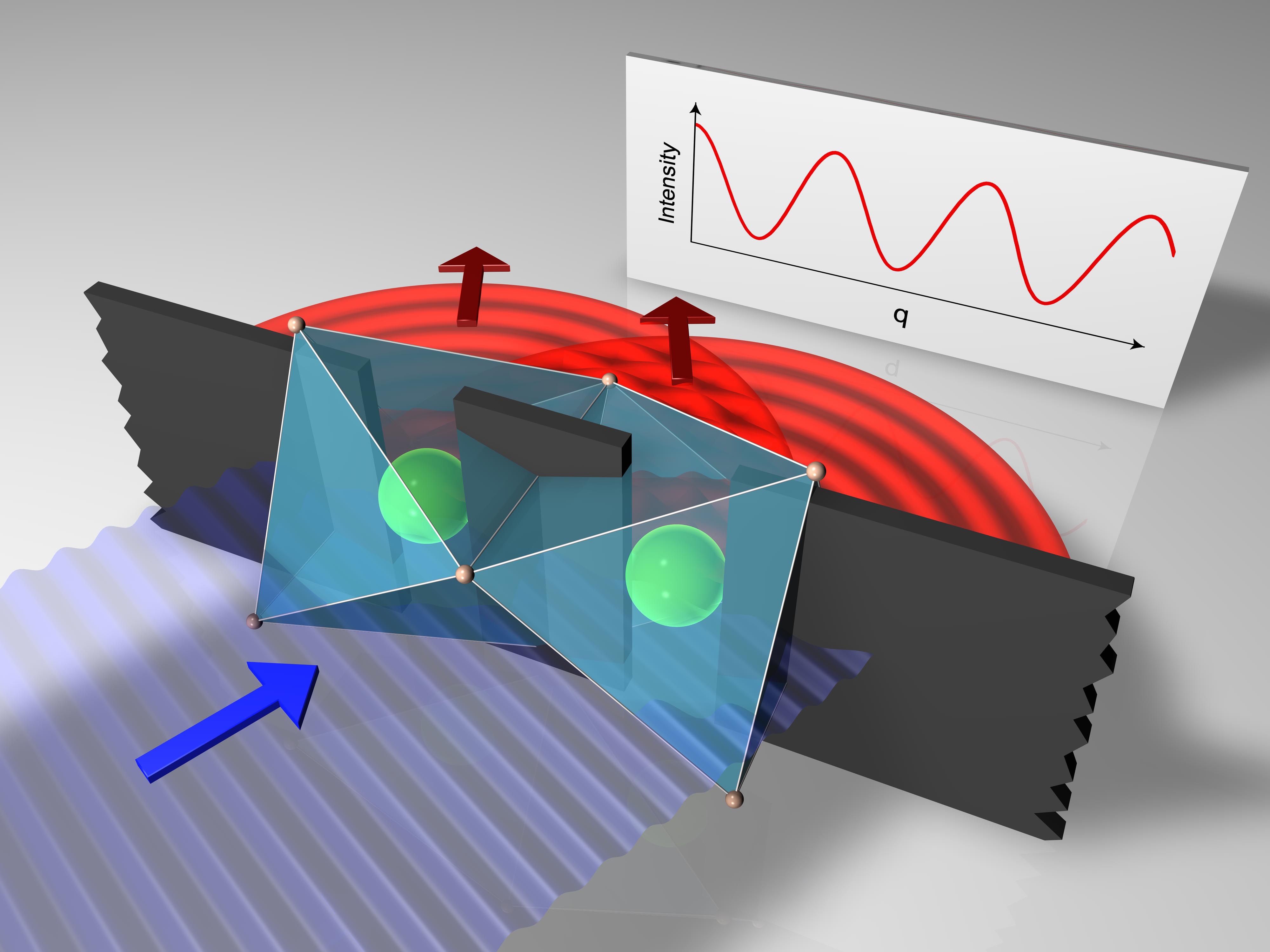 Double-slit experiment using resonant inelastic X-ray scattering on an iridium oxide crystal: An intense beam of high-energy X-ray photons (violet) hits two adjacent iridium atoms (green) in the crystal. This excites electrons in the atoms for a short time. The atoms emit X-ray photons which overlap behind the two iridium atoms (red) and can be analyzed as interference images. Credit: Markus Grueninger, Univ. of Cologne