As part of an international research team physicists from the Leibniz Institue for Solid State and Materials Research Dresden (IFW)  discovered a new magnetic state that is spontaneously generated by a superconductor with broken time reversal symmetry.

What is symmetry? In everyday life, we use this word quite often in relation to the mirror reflections to describe the visual similarity between the left and right sides of the observed objects. Sometimes one can encounter more complicated examples such as the rotational symmetry of ornaments and flowers, translation symmetries of grids, and honeycomb patterns. When it comes to the description of nature using the mathematical language symmetry is generally understood as a certain invariance of physical laws. For example, the invariance with respect to the coordinate transformations can be understood by studying the behaviour of rotated or translated physical objects. Such symmetries are intuitively connected to our everyday life experiences.

There is, however, a much more sophisticated concept of time reversal symmetry, which has been attracting philosophers and scientists for a long time. Time reversal is the cornerstone element of many physical theories. Intuitively one can imagine the time-reversed behaviour by taking a video recording of some system and then playing the film backward. However, in certain interesting cases, this intuition fails and the system can be expected to behave differently under the hypothetical reversal of the time arrow direction. For example, broken time reversal symmetry leads to a fundamental difference between particles and antiparticles. Thus, searching for new physical phenomena where time reversal symmetry is spontaneously broken represents a large fundamental interest and helps to understand better, how our universe works.

This study demonstrates that interaction between two highly symmetrical superconducting states (namely an s-wave) results in the formation of complex two-component superconductivity that breaks spontaneously time-reversal symmetry. This discovery is important for the development of a general theory of unconventional superconductivity and may open a new avenue for applications of the superconductors. 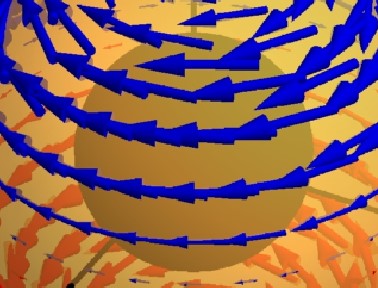