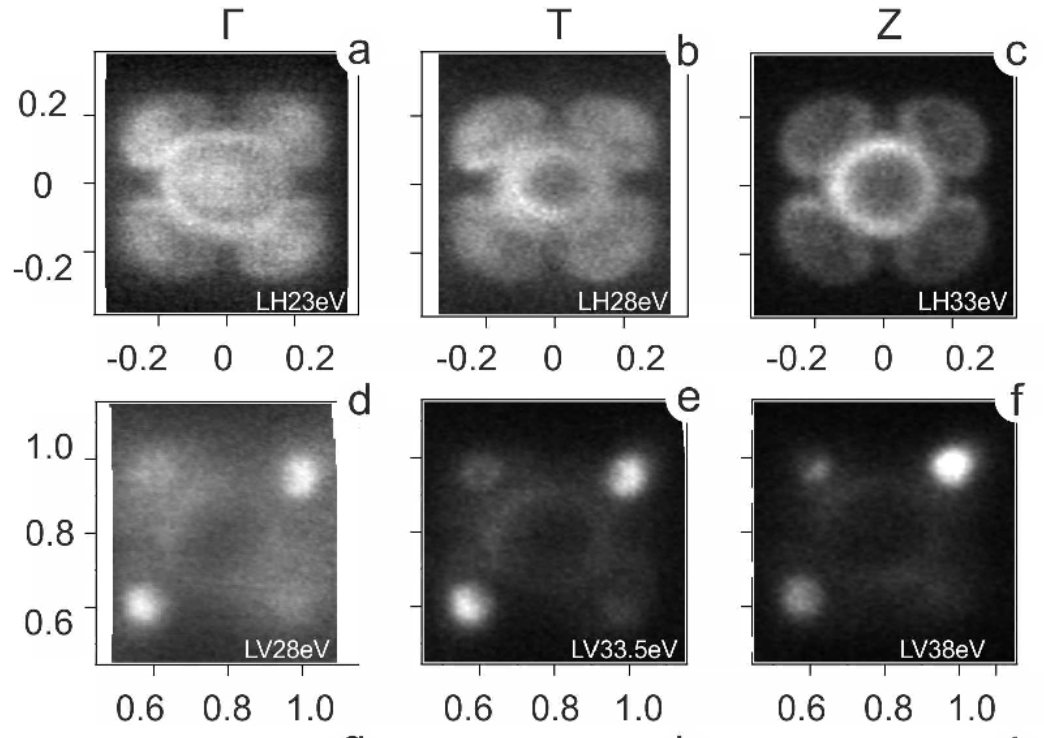 In order to understand, predict and control the physical properties of a material, it is necessary to know its electronic and crystal structures. This knowledge can be gained from the interaction of the matter with radiation.

The most efficient way to produce focused radiation of various wavelengths, small bandwidth and high intensity is realized at the large-scale facilities, the so-called synchrotron light sources. We study the microscopic behaviour of electrons and characterize static and dynamic properties of complex electron systems by means of state-of-the-art photoemission. We focus on synchrotron-based experiments. These experiments enable to study the electronic structure, elementary excitations, and static ordering of interacting electrons. We aim at establishing a comprehensive understanding of complex electron systems and their behaviour on various energy, time, and length scales. Angle-resolved photoemission spectroscopy (ARPES) is a powerful tool to determine the low-energy electron dynamics in solids. We typically use the synchrotron radiation with the energies in the range of 6-300 eV to record the energy and momentum distribution of the photoelectrons which leave the surface of the sample. This distribution is then used to extract the spectral function – the probability to find the electron with given energy and momentum in the single-crystal, i.e. its electronic structure. Materials hosting complex electron systems are a treasure trove for fascinating physical properties that raise great expectations for technological applications. Very prominent examples are unconventional superconductors, topological insulators, electronic density waves, multiferroics or heavy fermion systems. These materials are in the focus of many other IFF activities. The Group is thus organically embedded in the structure of the institute. We are involved in numerous internal research projects and can also provide a characterization service to other groups. External collaborations of the group constitute the powerful worldwide network with the participation of leading research institutions.

The subject of this research direction is a quantum phenomenon which represents one of the most persistent problems of condensed matter physics. The absence of a quantitative and comprehensive theory of superconductivity not only demonstrates the lack of our understanding of solids on a fundamental level, but also makes a targeted synthesis of new materials impossible, thus blocking an enormous application potential of superconductors. We are conducting comprehensive and systematic studies of the superconductors and hope that they will substantially advance our knowledge of superconductivityat a microscopic level as well as suggest new routes towards improving the existing and designing the new materials for applications.

The search for the topological matter is one of the central tasks of modern condensed matter physics. The discovery of quantum Hall effect (QHE) demonstrated that the ordering phenomena in solids can not only be characterized by the broken symmetry and order parameter in a sense of Landau theory, but also can be of a topological type. During the last years several compounds have been identified to be topological insulators, but in order to be suitable for any of the vast majority of the device or experimental configurations that have been proposed to utilize giant magnetoelectric and anomalous optical rotation, unusual excitonic condensation, spin-Galvanic effects, or the neutral half-fermions and interface superconductivity, the new topological materials are needed with improved functional properties. Among them are the high degree of bulk resistivity and insulation, electronic structure with both in-gap Dirac point and Fermi level and longer surface state life-time. Since the energy gap is needed to stabilize the topological phase, it is anticipated that the superconductivity can also be topologically non-trivial. Up to date such materials have not been clearly identified. Strong spin-orbit coupling as well as on-site Coulomb repulsion occurring on a similar energy scale implies possible topologically nontrivial phases including topological quantum phase transitions between some compounds of this series. Thus it is highly demanded to find new examples of topological materials in order to realize the promising applications. Angle-resolved photoemission spectroscopy is an ideal technique to study topological phases since it directly probes low-energy electronic structure of solids. Being very sensitive also to the surface states, the method delivers precise information as regards their dispersion, scattering rate, symmetry, intensity, etc. Using the different photon energies one is able to map also the bulk related electronic structure thus clearly identifying the origin of the observed electronic states.

Spontaneous symmetry breaking plays an important role in physics of very different phenomena,starting from the explanation of the observed masses of elementary particles up to the formation of stars. In condensed matter physics the symmetry of a crystal may spontaneously break due to theformation of a density wave - a state when magnetic moment, charge distribution, and/ororbital occupation vary in space with period larger than the lattice constant. The density waves in solids are a fascinating example of the self-organization of the valence electrons which leads to significant modifications of the physical properties of the material. It is currently under intense debates whether the charge and/or spin-density waves and their fluctuations are indispensable ingredients for the high-temperature superconductivity in the cuprates and Fe-superconductors. Our aim is to clarify the origin of the interplay between CDW and superconductivity and to extend the developed approach to the phase diagrams of the chalcogenides with low critical transition temperatures using modern ARPES and its combination with other techniques.

The junior research group is set up to strengthen the collaboration between the HZB and IFW in the field of photoemission spectroscopy of quantum materials by means of further improvement of experimental equipment at BESSY synchrotron. Nowadays the successful photoemission experiments require state-of-the-art combination of synchrotron beamline and end-station with the spectrometer. It should provide the high momentum and energy resolution, broad temperature range at which measurements are possible with the emphasis of the coldest side, as well as a high degree of the automatization. A special importance have the integration of all the components including the monochromator of the beamline, cryostat, electron energy analyzer and manipulator into a common system with flexible communication between all these components and comfortable user interface. With the help of such improved experimental equipment the group is supposed to demonstrate how the modern photoemission experiment can contribute to design and understanding of novel quantum functional materials.