Superconductivity - that means current flow without electrical resistance. This quantum phenomenon attracts the curiosity of many theoretical and experimental physicists who are working to discover and explain the underlying fundamental mechanisms. Intensive research on superconductivity is also driven by the possibility of new applications of these material class in energy and motor technology. Of particular interest is the material strontium ruthenate, which has been the subject of intensive research worldwide for over 25 years. In this compound, superconductivity is accompanied by spontaneous ring currents which, unlike normal currents in metal wires or supercurrents in conventional superconductors, occur as a property of the ground state - comparable to the electron motion in atomic orbitals, but in the superconductor caused by the collective motion of many electrons. Since this very special type of superconductivity with spontaneous currents is also relevant for quantum computing, strontium ruthenate could also be significant for future applications of superconductivity.

In a paper just published in the journal nature physics, subatomic particles called muons were used as probes to experimentally detect these subtle electric currents in superconducting strontium ruthenate using the resulting magnetic fields. This has shown that when strontium ruthenate is subjected to uniaxial pressure, the spontaneous currents start at a lower temperature than superconductivity. In other words, the transition splits into two regions: first superconductivity, then spontaneous currents. Such a split with symmetry-breaking pressure has never been demonstrated in any other material, requiring a new view of previous theoretical models. This work was only possible due to the technical development of a unique uniaxial stretching apparatus for muon spin rotation experiments. Scientists from IFW Dresden, TU Dresden, the Max Planck Institute for Chemical Physics of Solids, and the Paul Scherrer Institute participated in the study. 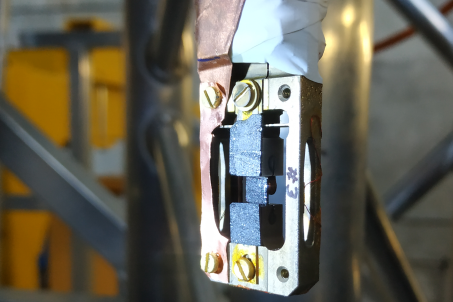