Synthetic black holes radiate, just like the real ones

Research led by the IFW Dresden and the University of Amsterdam demonstrates that elusive radiation coming from black holes can be studied by mimicking it in the lab.

Black holes are the most extreme objects in the universe, packing so much mass into so little space that nothing — not even light — can escape their gravitational pull once it gets too close.
Understanding black holes is key to unraveling the most fundamental laws governing the cosmos because they represent the limits of two of the best-tested theories of physics: the theory of general relativity, which describes gravity as resulting from the warping of spacetime by massive objects, and the theory of quantum mechanics, which describes the physics of the smallest length scales. To fully describe black holes, we would need to stitch these two theories together and form a theory of quantum gravity.

To achieve this goal, we might want to look at what manages to escape from black holes rather than what gets swallowed by it. The British physicist Stephen Hawking famously discovered in 1974, that every black hole must emit a small amount of thermal radiation due to small quantum fluctuations around its horizon.
So far, this radiation has never been directly detected. The amount of Hawking radiation coming from each black hole is so small that it cannot be distiguished with current technology among the radiation from all other cosmic objects.

Alternatively, one may try to study the mechanism underlying the emergence of Hawking radiation right here on Earth. How this can be done in principle is what researchers from the IFW Dresden and the University of Amsterdam set out to investigate. The answer to this fundamental question is an enthusiastic: "It actually works! We wanted to use the powerful tools of condensed matter physics to probe the unattainable physics of these incredible objects: black holes,” says Lotte Mertens, who has been researching the topic at IFW Dresden since January 2021 as part of her binational PhD.

To do so, she investigated a model based on a one-dimensional chain of atoms in which electrons can “hop” from one atomic site to the next. The warping of spacetime due to the presence of a black hole is mimicked by tuning how easily electrons can hop between each site. With the right variation of hopping probability along the chain, an electron moving from one end of the chain to the other will behave exactly like a piece of matter approaching the horizon of a black hole. And, analogous to Hawking radiation, the model system shows excitations that act exactly as if they have a temperature.

Despite the lack of actual gravity in the model system, considering this synthetic horizon gives important insight into the physics of black holes. “Hawking radiation only occurs when the model system starts out without any spatial variation of hopping probabilities, mimicking homogeneous spacetime, before being changed into one hosting a synthetic black hole”, says Mertens, “The emergence of Hawking radiation, therefore, requires a change in the warping of spacetime.”

The predicted Hawking radiation requires some part of the chain to exist beyond the synthetic horizon. This means that the existence of thermal radiation is intricately connected to the quantum-mechanical property of entanglement between objects on either side of the horizon.
The researchers point out that a Hawking temperature is obtained in the synthetic black hole only for a very specific spatial variation of hopping. This may actually have implications for general relativity: so if the analog holds, there is a purely thermal spectrum only in certain gravitational situations.

“Because our model is so simple, it may be implemented in a range of experimental setups”, says Mertens. “This could include tuneable electronic systems, spin chains, ultracold atoms or optical experiments.”
In general the developed methodology shows that specific, elusive phenomena of the universe can be observed through carefully constructed material systems. Exploring black holes by using modern materials research in the laboratory may bringing us a step closer to understanding the interplay between gravity and quantum mechanics. 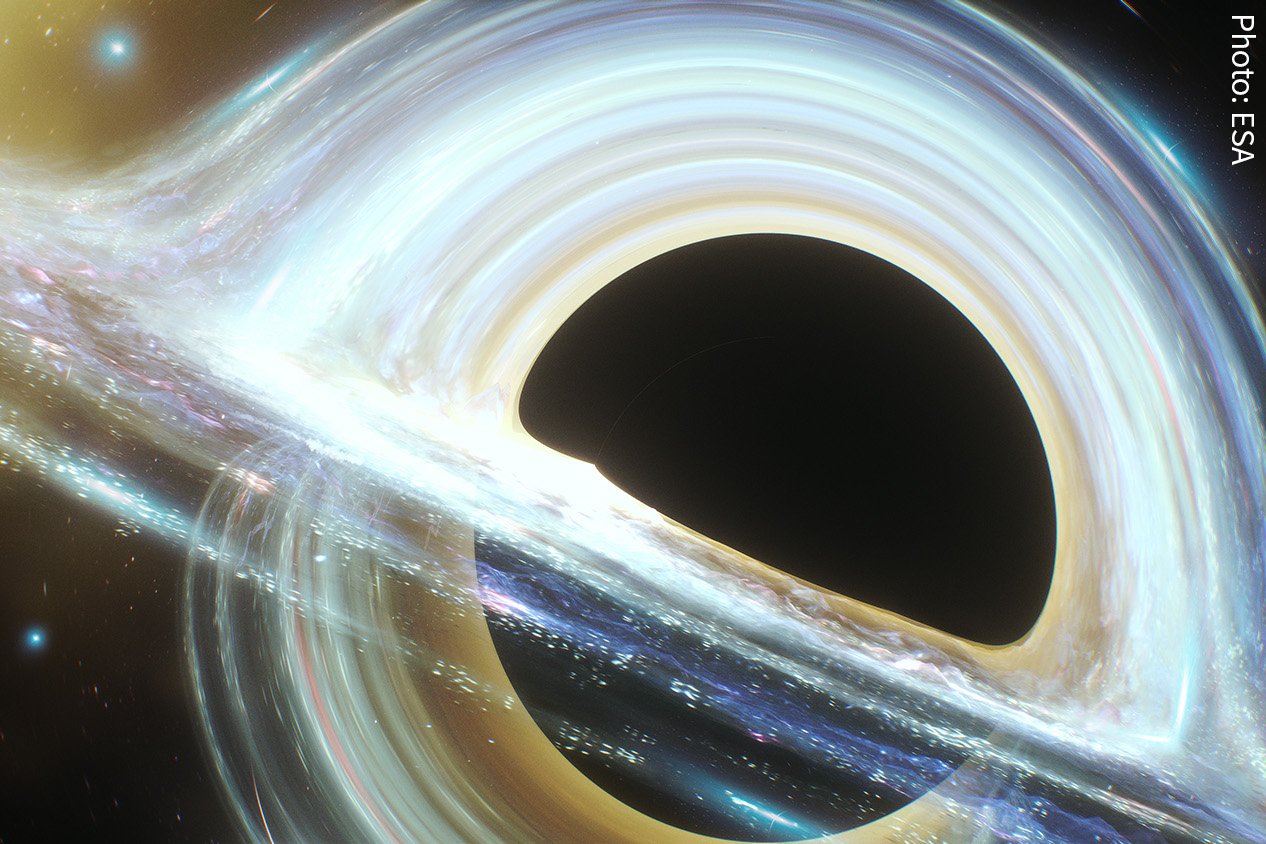 Computer simulation of radiation through the all-swallowing gravitational field of a black hole. Photo: ESA